With thoughts of Tapas and Flamenco, we boarded our Vueling flight to the city of Sevilla.  The date was 25th September 2010.  We were supposed to stay there for a couple of nights but due to the visa delay, we had to be content with just one night.  Sevilla is actually a huge city.  Most of the attractions are in the old part of town where we stayed.  During this stay, we tried to use this booking site that I found called Airbnb.  The concept is renting a room with the owner of the house.  It’s like staying with a friend who lives overseas but here you are strangers.  Some rent the whole place out.  Some just rent off one of the rooms.  Even couches are offered in places like Paris.  Anyway, getting back to Sevilla.  We stayed at Calle Aposentadores.  It is very near the center but since we couldn’t find the place in the map we had, we found out after we took a cab. 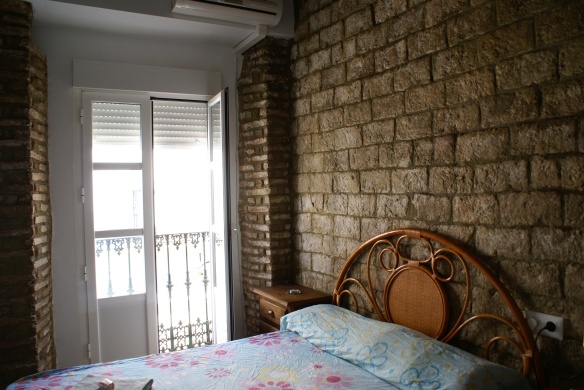 They weren’t kidding when they said that the tapas here are good.  We went to a very small tapas bar where the lady can only speak Spanish or Russian and got some tapas which were so delicious.  It didn’t look like gourmet stuff but it tasted really good.

That evening, we tried a place called Bodega Gongora where we found out that roasted red peppers are fantastic especially with anchovies and that adobo in the menu means marinated fried fish cubes.  We also ordered some Calamares.

Once we got food in our system, we tried to get out of our little neighborhood.  We kept on going around in circles so we decided to take a cab.  The pretty lady cab driver told us that it is really quite near.  But due to the small one way streets, it would be harder to drive around.  At the city center, we saw THE Cathedral.  Believe me when I say it is HUGE!  The camera can barely capture the immensity of the whole structure.  They started construction in 1402 and continued well until 1506.  Their idea at that time was:  “Let a church so beautiful and so great that those who see it built will think we were mad.” Before Seville Cathedral, Hagia Sophia held the honor of being the biggest cathedral in the world.  It is currently the largest Gothic Cathedral and the third largest cathedral in the world.  We wanted to go in to see the interior and to see Christopher Columbus’ tomb but there was an ongoing funeral service.

While Jore was getting bored and asking where we should go to see a live Flamenco show, we heard the sound of music and shoes tapping against the cobblestones.  We followed our ears and found a big group of Sevillanos doing the Flamenco.  It was loud, fun and wonderful.  You just start clapping to the tune and smiling as they twirl in their lovely costumes.

All in all, I have to say that Sevilla is as charming and warm as people claim.  It is one of those places you immediately fall in love with.  The food, the people and the place itself were so nice and quaint that you feel like staying a bit longer to know it better.  We really wished we could have stayed longer but we couldn’t extend as the room we stayed in has been booked and with the Huelga General just around the corner, it would be wiser to chug along to Madrid via the AVE. 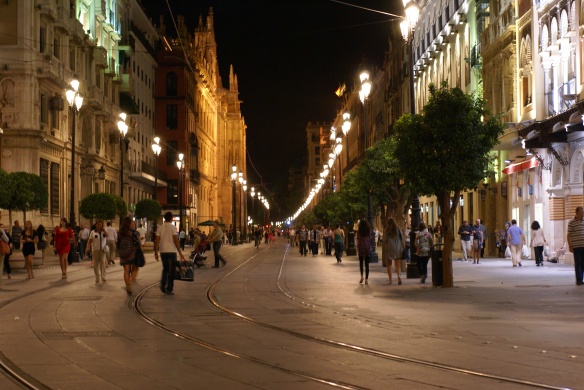 One thought on “Bailamos Flamenco”